The Voice of the Wildkats • December 11, 2019 • https://wildkats.org/1622/showcase/parade-entertains-community-sparks-holiday-spirit/ 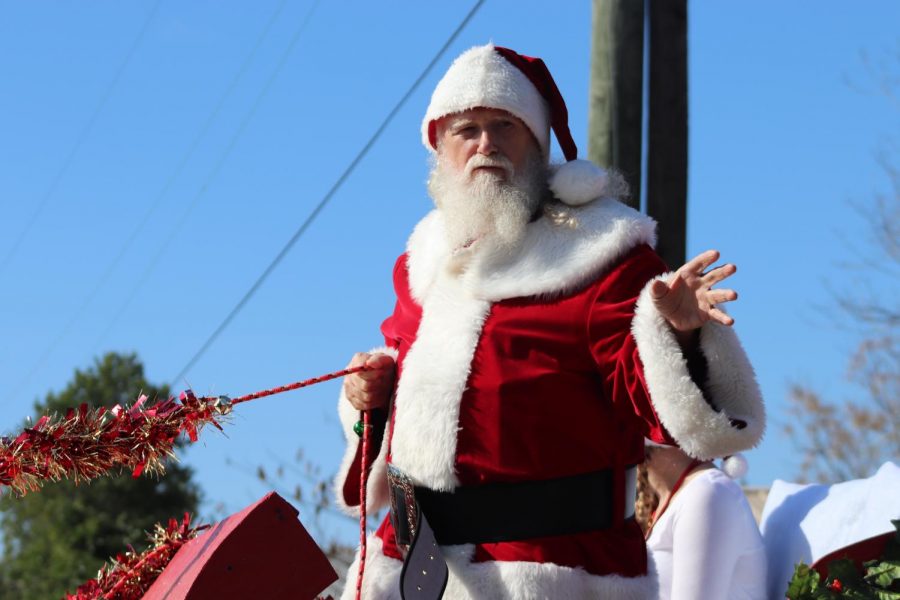 COMING TO TOWN. Santa made an appearance during the parade. He was also available for pictures at the end of the event.

The Willis Christmas Parade was Saturday starting on Campbell Street.  The holiday spirit started before the parade started with a local church handing balloons to anyone who wanted one.

“Christmas is my favorite holiday, so I went for the Christmas theme,” junior Terri Ray said. “In one of the cars there was the Grinch,. It was kinda scary, but I liked it.”

Participants of the parade enjoyed their experience in the parade as they rode around in their Christmas theme.

“It was really fun to be able to see all the little kids,” senior Ali McNew said. “ I had a reindeer onesie on so kids were pointing, but it was nice to see the whole community come together for one event.”

The weather was definitely on the right side this past weekend for the Christmas parade.

“I had a great time,” Chef Sandra Jefferson said. “And the weather was perfect. It was a great community involvement activity.”

Seniors enjoy the last route around with their classmates as 2019 wraps up.

“I enjoyed marching with my friends in the parade for the last time,” senior Hannah Wilson said.

JROTC made a commitment to be present for the community and show their involvement.

“Our command staff worked hard to get all our candidates there,” Sgt. Christopher Bell. “Cadet Baldwin and Cadet McGraw did an outstanding job.”

Locals loved how much the parade have grown and what was added to the excellent of the parade.

“It was my second time going,” sophomore Ryan Stevens said. “I like seeing the cars and the decorations on them.”

Band members loved passing the community and seeing all the little kids faces.

“I enjoyed seeing all the people faces as I passed marching in the band,” senior Alex Garrison said.

Holiday music filled the cool breezy air as participants march the route of the parade.

“The parade was really fun because we got to play jingle bells while marching and got to see all the kids happy,” sophomore Leo Mire said.

The Christmas parade is a community event, and the clubs involved use the opportunity to show off their hard work.

“We look forward to the Christmas parade because it gives us a chance to have our kids present themselves to the community,” Col. Vincent Jefferson said. “So the community can get a sense of pride that our candidates have in the program.”

The parade brought out the best in students who marched for the community..

“It was really cool to see the community come together,” senior Blaine Munguia said. “They don’t have to show up, but the fact that they come to support different schools in the area and other organizations is really cool.”

Even the big man in red dropped in to say an early Merry Christmas to all.