The Voice of the Wildkats • March 12, 2020 • https://wildkats.org/2171/wildkat-sports/lady-kats-basketball-honored-with-post-season-awards/ 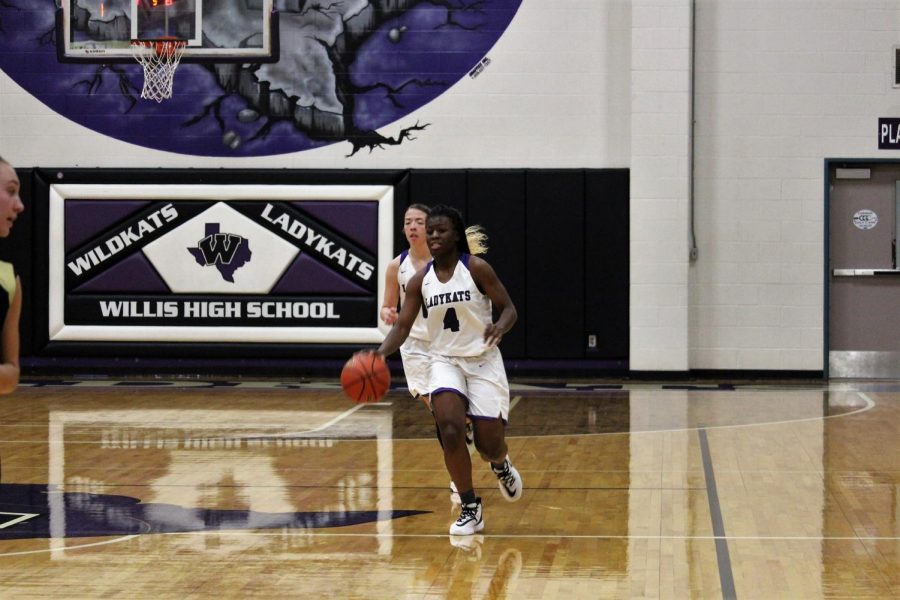 in the game against Montgomery, senior TeTe Hollis take the ball down the court. Hollis was named first team All- District

A season of hardwork and dedication has come to an end for the Willis Ladykats basketball team. Harvesting the fruits of their labor, the team collected a slew of post season awards and achievements. From academics to athletics, a broad range of awards was received by the Ladykats.

In the Word “Student-Athlete”, the word student comes first. This sentiment was represented well, as many of the Ladykats one academic awards. Allison Aitken, Shemaiah Eldridge and Izzy Gonzales were awarded Academic All-District.

“I take it as a great honor,” sophomore Izzy Gonzales said. ‘I’m glad my hard work off the court was recognized”.

“Being in honors classes as well as being a basketball player is a challenge,” senior Cali Barlow said. ‘I am glad I was able to be recognized for my efforts”.

“I spent a lot of time preparing for this season,” senior TeTe Hollis said. “From Summer Pride to preseason I’ve had my sights set on this award since last year.”

Defense is arguably the most important part to a basketball’s team attack. To possess a player that is able to prevent the other team from scoring is vital, and senior Jasmine Kelly is the best at it in the district. Kelly was voted as the District 20-5A Defensive Player of the Year, as well as Academic All-District.

“I am so proud to be able to call myself Defensive player of the year,” Kelley said. “I work hard on the defensive aspect of the game as I believe it is the most important.”