The Voice of the Wildkats • March 23, 2021 • https://wildkats.org/4316/wildkat-sports/varsity-softball-ready-for-district-play/ 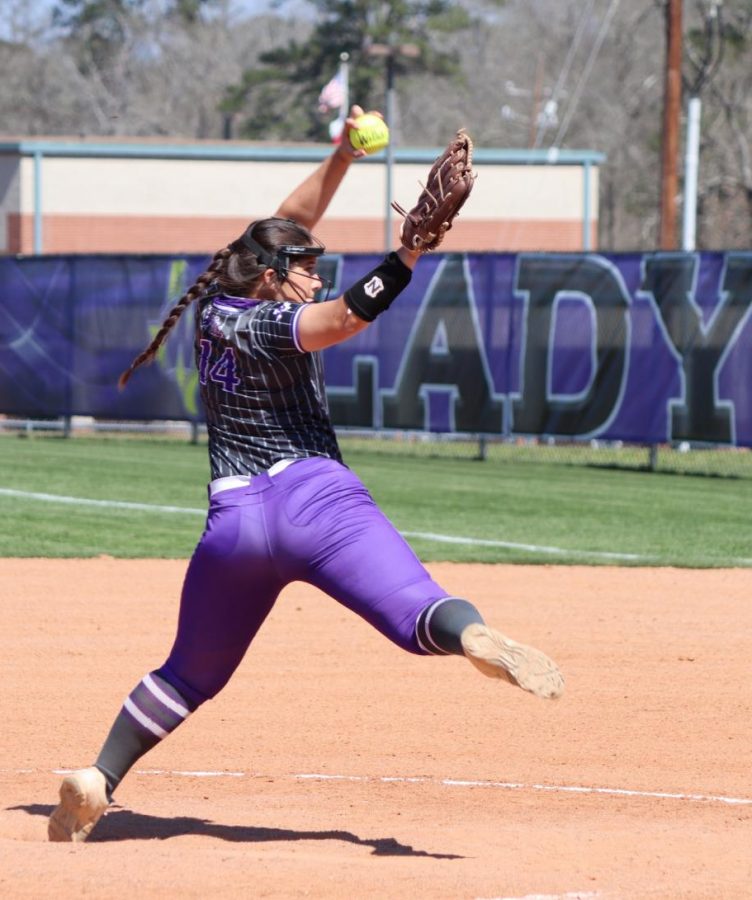 1 2 3 RALLY. Pitching for the Ladykats softball team during the tournament was senior Marissa Fletcher.

Walking up to home plate with a Louisville in her hands and adrenaline pumping, she takes her stance and is ready to bat. The pitcher takes a step forward, swings the ball back, and releases it into the air. Slam, she hits the ball perfectly. Then she drops her bat and makes a bee line for first base, then second base, third base and finally, the home plate. Home Run. The varsity softball team has gotten off to a good start this season by placing second in their tournament on March 6 and is looking forward to games they have ahead of them.

Even though the season has just begun, the team has already made five home runs and they continue to work hard to accomplish their goals.

“The season has been going good so far and we’re starting to come together as a team,” sophomore Jolie Boyd said. “My favorite thing about being on the team is the fact that we have such a tight knit group that there’s never a dull moment with all of our players. My goal personally for the season is to grow individually and to continue learning about the sport I play.”

This is the time to put in the work and keep growing  instead of slacking off in her sport for senior Marissa Fletcher.

“I am going to play at Galveston College,” Fletcher said. “Now that I am continuing to play, I feel like I have to work extra hard to prepare myself for the next level.”

Each teammate has an important role on the team and they have to do their part to reach the goals that they have set for themselves.

Freshman Kynlei Chapman is putting in a lot of hard work as well to keep up with the rest of her team.

“I have played softball for almost 10 years now and I have put in a lot of work ever since I was 11 years old,” Chapman said. “I have been grinding on and off the field to give it my all. I honestly think that being a freshman on varsity is pretty hard because I’m always fighting for a spot that belongs to an upper class man.”

“I have played catcher for about six years now,” sophomore Lauren Hues said. ‘As a catcher I see the whole field and it is my responsibility to let the team know what is happening and where the play is at. This season my team goal is for us to make it as far into the playoffs as we can for our first year in 6A.”

Teammates that play as the pitcher have a key role in the game and have to be ready for anything.

“It’s pretty cool being a pitcher,” Chapman said. “I know everyone has their eyes on me and I am in the center of the field so I’m always under pressure and I have to handle it in the right way. It’s more than just pitching, it’s staying in the right headspace and not showing emotions.”