The Voice of the Wildkats • October 8, 2021 • https://wildkats.org/5619/wildkat-sports/volleyball-fights-hard-against-district-rivals/ 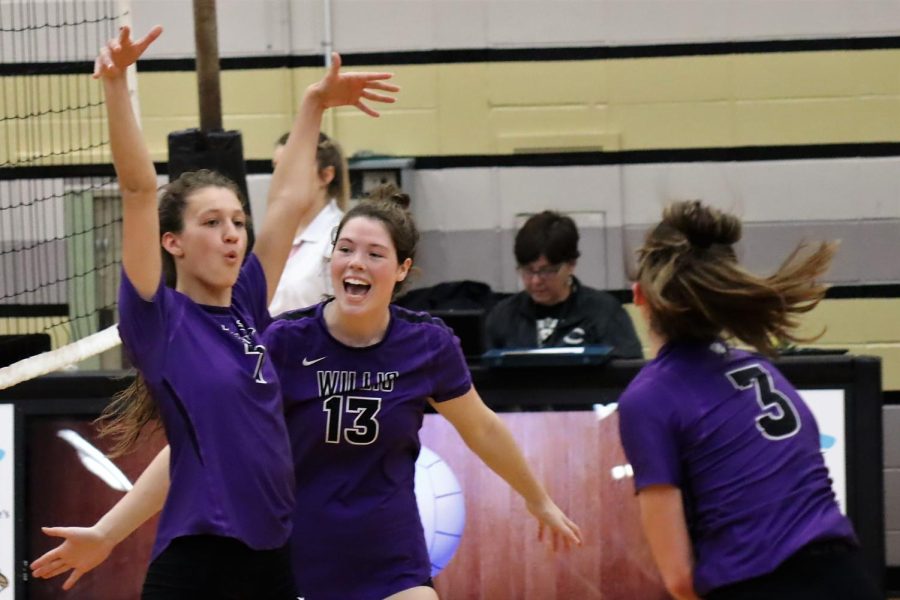 THAT A GIRL. At the game against Conroe, senior Georgia Everett congratulates senior Rylee McDonald after a great play. The team fought hard and lost in five sets to the district rival.

Purple surrounds the visitor side of the gym. Faces are red as players dive and spike the ball into the air. The stands cheering “We… Are…. Willis…” after every touch by the LadyKats. Both student sections yelling at each other trying to prove which school is better.

The LadyKat volleyball team went against their rivals, the Conroe Tigers, on Oct. 5th. In the heated match, the LadyKats fell short after playing in 5 very close sets.

Every team has challenges they have to face. The LadyKats make the best of a hard defeat and look for the positive.

“It felt so amazing to play that hard against our rival,” senior Rylee McDonald said. “This season is going by so fast, and I am so grateful for my awesome coaches and teammates.”

After a tough loss or when things are not going in the team’s favor, motivation is sometimes hard to find. The team has to rely on each other.

“The thing that motivates us to keep pushing through each set is determination,” senior Georgia Everett said. “We have the drive to keep going even when things aren’t always going our way, which helps out a lot.”

During an intense set, the LadyKats were able to comeback and win 27-25. They were able to win point after point to help boost the morale of each set.

“The highlight of the game for me was definitely running off about five kills in a row,” senior Taylor Thomas said. “It was super exhilarating to come back from a five point deficit to end up beating them and hearing the fans go crazy for us.”

After their loss, the LadyKats are looking forward to beating the Lady Tigers next time. With home advantage, they hope for a big time victory.

“It feels good to be able to face them the first time this season,” senior Reece Edmiston said.  “We are ready to get our revenge and play our hearts out for the last district game.”