The Voice of the Wildkats • October 22, 2021 • https://wildkats.org/5945/showcase/homecoming-parade-showcases-greatest-show-on-turf/ 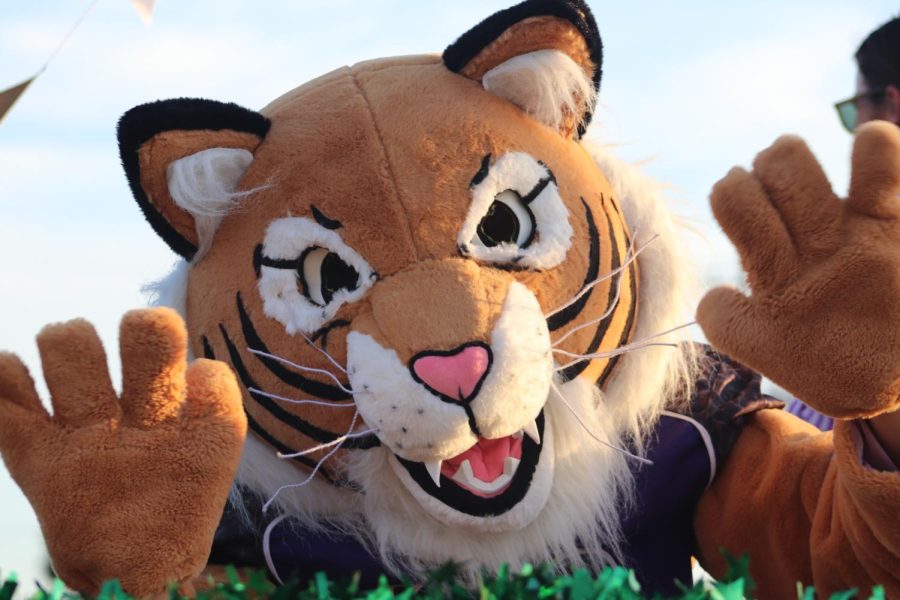 Music is playing and smiles are seen everywhere. Baseball players are dressed as referees with clown faces, golf is sporting purple tutus and volleyball is dressed up as circus animals. Dozens of floats representing high school clubs, elementary schools and community organizations are lined down the street. Children scream as they wait for candy. The Grand Marshals signal the start of the parade, and the floats begin their trip down Wildkat Drive. This is the Greatest Show on Turf.

The night was marked by a highly energetic competition amongst the parade’s participants. Awards included the Principal’s Award and the Most Spirited Award.

“I felt like the team bonded during the parade,” senior Dawson Dobraski said. “All the players had a lot of energy throughout the whole thing. The seniors dressed up as flamethrowers, and it was a milestone for the baseball program to win the most spirited award.”

While some organizations rode floats, others were able to march, walk, cheer and dance down the street.

“Parades are always daunting, but the overall experience is always enjoyable,” senior Zane Martin said. “Having to march the quads, I had to carry a lot of weight for a long time. Although my back was in pain for a majority of the parade, seeing the people’s faces as we passed by made the whole experience worth it.”

Following a year of coronavirus restrictions, the town was able to experience the first parade since 2019. For freshman and sophomore students, this was the first time they were able to participate as high school students.

“The parade was a really fun experience,” sophomore Kinley Gibbs said. “I went with Spanish NHS and the environment and people in the club really made it a great time for my first parade.”

The event brought the community together and showed athletes and students alike that they are appreciated. This was the first time that the wildkat community was able to see those elected to the homecoming court. Dukes and Duchesses as well as the King and Queen candidates were able to ride down the street in vehicles.

“It was a great feeling, I had a lot of fun seeing the whole community come out and watch the parade,” sophomore Duke Derek Lagway said.

Students who participated were given the opportunity to do more than simply be seen. They were able to directly interact with children lining the street. Seeing the various organizations make their way through town inspired the next generation of wildkats to dream big.

“I loved the parade and seeing all the effort that everyone put in to make it memorable,” sophomore Sweetheart Ava Hardin said. “One of the greatest feelings in the world is hearing a little girl off to the side say that she wants to be like you when she grows up.”

The parade meant a little more for the Lagway family this year. The district’s recently built elementary school was named after Eddie Ruth Lagway, who diligently served as an educator for many years. The family was honored by having the sons of Eddie Ruth Lagway named as the Grand Marshals for the parade.

“It was an honor and a blessing to our family to be asked to represent Willis as Grand Marshal in the parade,” Derek Lagway Sr. said. “As far as my family, we are just over the moon about Lagway Elementary and the tailgating for the home games because my mother and other family members who are no longer with us have always been die-hard Willis Wildkat fans. So in a way, we feel we are honoring them and starting a new tradition and bringing the community together.”