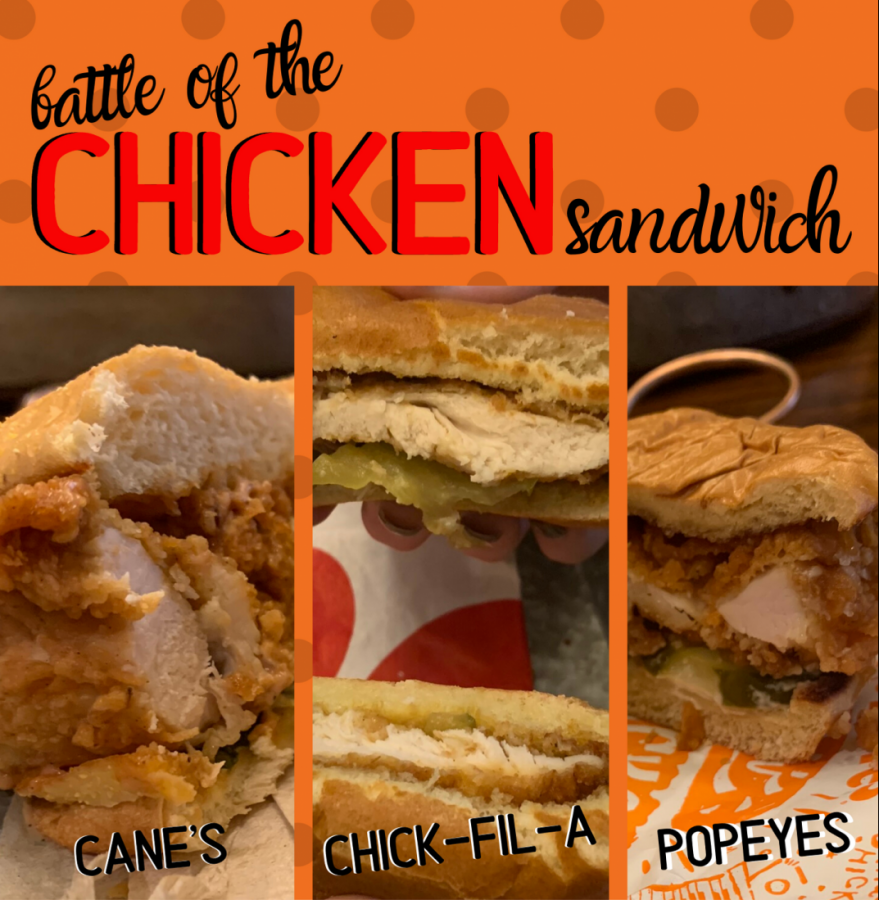 photo or infographic by Kelsey Soape

In a taste test, which sandwich is better? Canes, Chick-fil-A or Popeyes?

Popeyes. Chick-fil-A. Cane's. Which bird is worth the hype?

Unless they are living under a rock, everyone has heard about the chicken sandwich controversy. Popeye’s recently introduced a chicken sandwich that broke the internet and drive thru lines across the country. But is it worth the hype? Everyone knows and loves the Chick-fil-A chicken sandwich. The Raising Cane’s sandwich is lesser known, but since they are known for their strips, and sauce, the sandwich is should be just as good, maybe even better. But how do these sandwiches perform when pitted against each other?

After waiting two hours in a total of three drive-thru lines, the sandwiches and sweet teas were obtained. The smell of them overtook the car. The most distinct smell was the Chick-fil-A sandwich, but that is because it was the most familiar smell around. The Raising Cane’s sandwich smelled like their special-secret sauce. The Popeyes’s sandwich smelled like mayonnaise.

At first glance, the Raising Cane’s sandwich looked the most appetizing. The sauce was dripping down the sides and the chicken looked moist and flavorful. The sandwich had Cane’s sauce, three chicken strips and lettuce on a large sesame seed bun. It made the Chick-fil-A and Popeyes’s sandwich look bland and boring in comparison to the Cane’s masterpiece. The Chick-fil-A sandwich looked warm and crunchy under the two soft and buttery buns. The pickles were strategically placed to were each bite would seem to have a little bit of everything. This sandwich looked slightly better than the Popeyes’s sandwich. The Popeyes’s sandwich was a big and bumpy fried piece of chicken on a small but tall bun. The buns looked dry, and the chicken looked average. The mayonnaise was barely spread over the bun and was clumpy sitting in the crevices of the chicken. Why would anyone risk their life, literally, for this dry, clumpy and plain sandwich?

It was time for the sandwiches to be eaten. Going into the first bite, the Cane’s was by far expected to be the best tasting, with Chick-fil-A coming in second and Popeyes’s way down the list. Chick-fil-A sandwich was the first to be eaten as the flavor was already known and expected. It tasted the same as it always did, sweet, salty and every bit delicious. After the tasting palettes were cleaned by sweet tea, the Cane’s sandwich was eaten next.

The lettuce was heated and tasted like sour spinach. The sauce did not mix well with the bun and the spinach-like lettuce. The chicken was too warm and the bun had no flavor. It did not mix well.

Last and expected to be the least, the Popeye’s sandwich was tasted. The first bite was heaven.

The chicken was perfectly cooked and the pickles tasted fresh with the perfect amount of sweet and sour. The bun was the exact right flavor and texture for the chicken, and the mayonnaise added so much more to the sandwich.

The chicken sandwiches were an unexpected successes and failure of flavor. With the Chick-fil-A sandwich being a perfect gauge of the winner, Popeye’s won by a landslide. The hype might just be worth it.