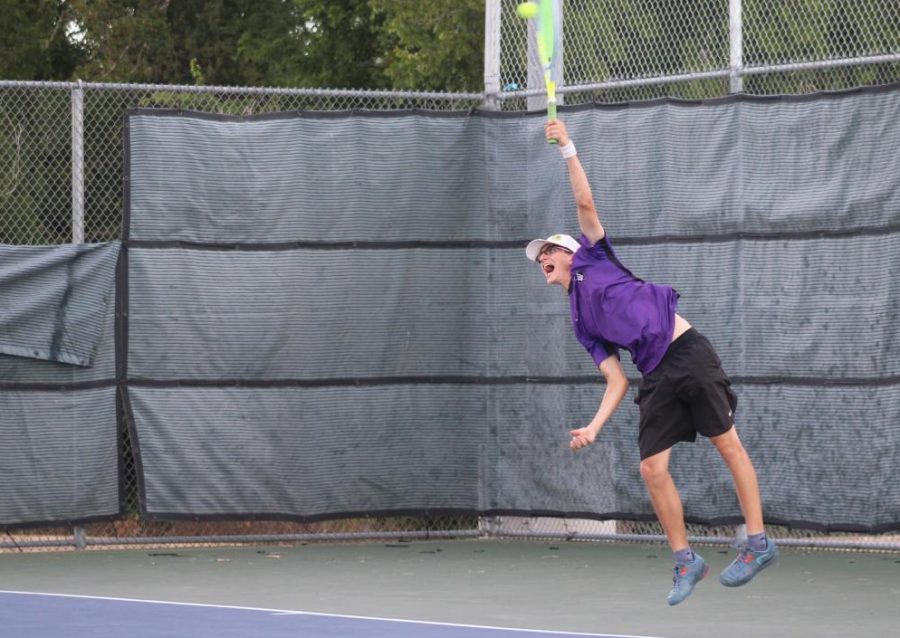 photo or infographic by Blaine Eckert

RAISING A RACKET. Starting a point with a strong serve, Jacob Player prepares for a tough district season with a practice match against Huntsville.

With district tennis matches fastly approaching, players and coaches are getting ready by practicing, trying to find the winning combination and playing matches against other schools outside of the district. With the team’s first match taking place Friday, Aug. 19, everybody on the team is looking for the key to success.

“I like to work out by pumping weights and practicing with my father,” junior Marcus Shumake said. “I also practice every day with my team.”

Some players are looking to start practicing outside of high school. Doing more outside of school helps players get in the practice that they need before Friday.

“I like to learn from the professionals by watching tutorial videos,” junior Pedro Cantarero said. “I will also try to contact teammates this week to try and get a little bit of extra match play.”

Practicing against players that are on the same or higher skill level also prepares them for the tough opponents in this year’s district.

“I like to practice against people who are better than me,” senior Emma Baron said. “It helps me handle the tough players from the other schools in our district.”

With a new year comes new leaders in the form of upperclassmen. For the past four years, the current seniors have learned everything that they need to leave the program better than they found it.

“Leading by example is a huge part of being a senior, if underclassmen see you performing well with the right attitude, it goes hand in hand,” senior Rohan Patel said. “Making sure that your voice is heard is another thing, if somebody does something that does not represent us well, you have to speak up against it.”

Maintaining a positive attitude and relationship with the team is also a vital key to success.

With a hard season ahead of them, every match will be hard-earned for the Wildkats. The fall varsity tennis season will be stacked with all of the District 13 6A opponents, a bunch of 5A playoff teams, and a few individual tournaments mixed in. The players and coaches have their work cut out for them as they set goals for themselves and the rest of the team.

“It’s about confidence, but also about bringing positive growth to the team and the teammates around us,” Baron said. 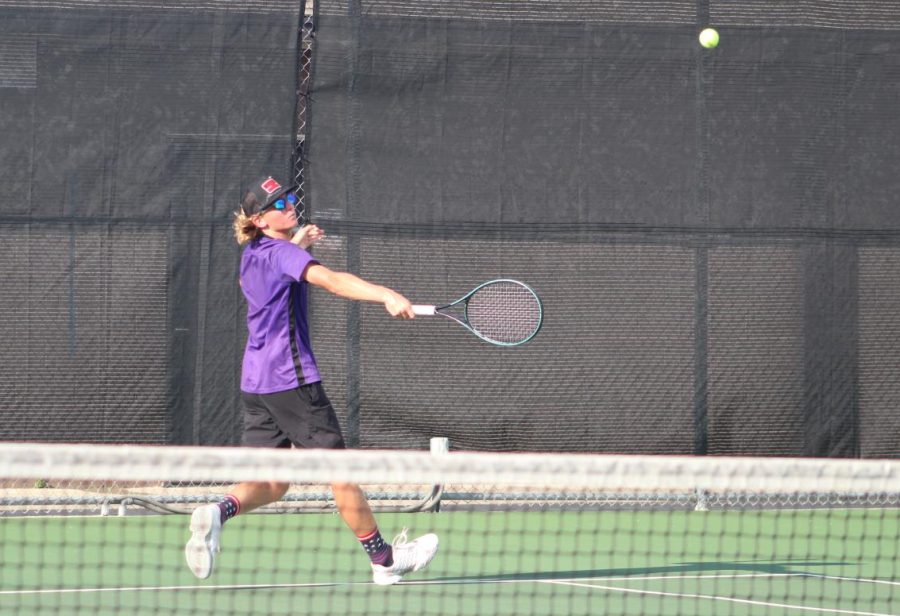 photo or infographic by Hannah Hartman

Swing. Hit. Score. Varsity senior captain, Blaine Eckert scores against the Grand Oaks grizzlies. He goes on to win a set against the grizzlies in his singles match.

Tennis travels to Galveston to better prepare for district play

Not only does the game of tennis have a physical toll on the player, the mental game is what makes or breaks an athlete’s match. Tennis is a very mental game, strategizing against their opponent and preparing for what their next move will be. These young athletes can win or lose a match before the game even begins.

On Sept. 9, 2022, the varsity tennis team traveled to Galveston for a weekend tournament against tough opponents outside of their district, helping these athletes to prepare themselves better for the rest of their district play.

Competing the way these athletes did against College Park will prepare them for the tournament in Galveston.

“I feel like we competed well against College Park,” Coach Garry Kemp said. “Even though we did not win the match, many of our players played some of the best tennis they had ever played in their previous matchups with other teams.”

The team is preparing for the heat and getting pumped up for the tournament.

“We are still trying to get acclimated to the heat,” senior captain Blaine Eckert said. “Galveston is going to be very humid and it is important to stay hydrated so we can outlast the other team. I am also looking forward to having more fun with the team, but it’s also a chance to have a little bit of fun at the beach.”

Although the team graduated seniors last year, this year’s group of seniors have been stepping up to the plate.

“We graduated a lot of players last year and that gave an opportunity for many players this year to play their varsity matches,” Kemp said. “We have good leadership with our current seniors and our younger players have stepped up this year to fill in the spots that were open on varsity.”

Mental preparation and excitement for this tournament brings a sense of determination to the team.

“The team prepared for their Galveston trip by first getting mentally prepared,” junior Lauren Carlson said. “And also practicing everytime we could and giving out everything to get better. Just getting to go on a trip with the team is amazing. Like how exciting is that?”

Team bonding and supporting each other leads teams to more victories than if they were to compete without it.

“The most exciting part of the Galveston trip was seeing our players bond while playing teams from the Galveston area,” Coach Kemp said. “Seeing us support each other through our matches. We lost our first round match in a very close contest 8-11 but then came back on Saturday and played really well and won against Dickinson and La Porte.”