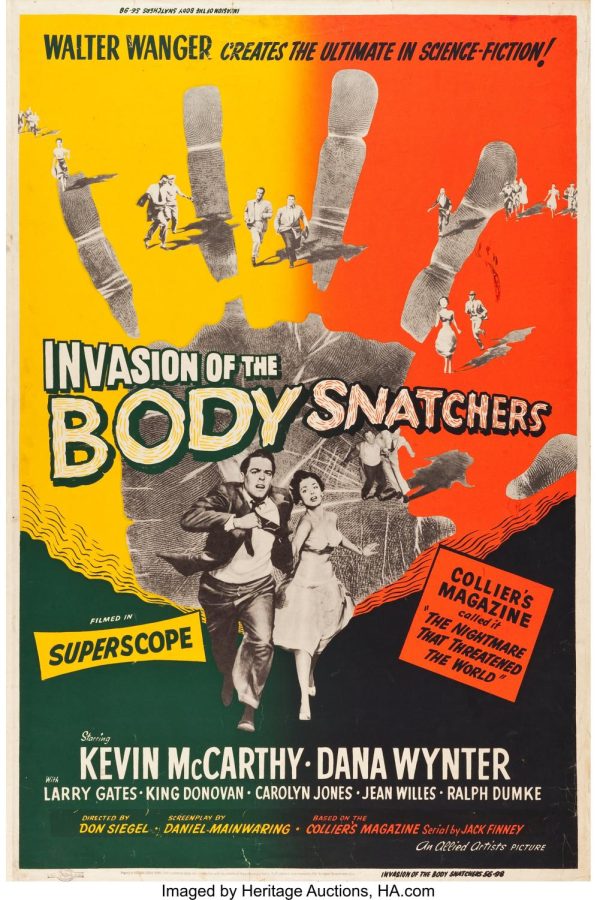 photo or infographic by courtesy of Olive Studios

BODY SNATCHERS. This classic 1956 horror film is considered one of the most influential Sci-Fi films of all time stars Kevin McCarthy as a doctor in a small California town whose patients accuse their loved ones of being extra-terrestrials.

Invasion of the Body Snatchers 1956 (no rating)

Cops appear at the hospital in the dead of night, anticipating what they might find waiting for them. As they approach the locked door, they hear desperate screams.

The 1956 Invasion of the Body Snatchers, directed by Don Siegel, is a wonderful display of the classic horror style. The movie inspired three remakes through the years. From 1978, 1993, and 2007, the franchise has made itself quite a name. Though the original movie has aged, it still remains as chilling and engaging as it did when it premiered.

The story told by Dr. Miles Bennell (Kevin McCarthy) while he sits in a hospital, pleading his case against insanity, follows him through his hometown, taking in patients of “an epidemic of mass hysteria,” leaving people to believe their relatives weren’t themselves. It isn’t until Miles encounters an undead, inhuman body, that he starts to look into the situation further. Along with his lover Becky Driscroll (Dana Wynter), he searches his town, desperate to find the truth. As the movie twists and turns, it is up to them to save everyone from themselves, while also struggling to survive to tell the tale.

The nostalgic yet eerie  style of old horror movies truly shows through in the 1956 classic. The movie is similar to the Twilight Zone, taking the ideas of the weird, of turning them to a darker place, and managing to still be a relevant classic nearly 70 years later. The movie is thrilling, while also not one to leave you terrified of the dark for the next week. A marathon of all four movies on Amazon would be just what the doctor ordered this spooky season.