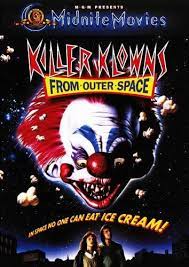 photo or infographic by courtesy of Sarilu/ Diamant Productions

KILLER GO TIME. Clowns are scary. When they come from outer space, it doubles the scares.

“That was no shooting star, looks like a… circus tent.”, Debbie said, unknowing of what horrors await her inside.

“Killer Klowns From Outer Space” is a goofy horror movie directed, written, and produced by the Chiodo Brothers, Edward, Charles, and Stephen Chiodo. Written as a horror comedy, the film is a perfect example of just that, a fun little b-movie that does not take itself too seriously in its plot or horror elements. It was a very impressive feat considering the Chiodo Brothers’ low budget they had and out came a wonderful little movie like “Killer Klowns”. Over recent years the film has been rediscovered and has grown its own following of fans of the 1988 classic. The revival of “Killer Klowns” has resulted in a sequel in development as well as a game slated to release in 2023. This film was the little horror movie that could and judging by its recent rediscovery, it is going to keep on going.

The movie follows Mike Tobacco (Grant Cramer) and his girlfriend Debbie Stone (Suzanne Snyder) as they find a mysterious circus tent after chasing what they thought was a shooting star. Soon they discover that it was the shooting star, and inside are a whole clan of evil space Klowns. The Klowns descend upon the small town of Crescent Cove capturing the people of the town in cotton candy cocoons using silly clown-like tactics. Tactics such as a trojan horse esque pizza delivery. With Debbie being captured, it is left up to Mike as well as Deputy Dave Hansen (John Allen Nelson) and the ice cream truck driving Terenzi brothers, Rich (Michael Siegel) and Paul (Peter Licassi). This group is going to have to fight for their hometown and the Earth in the circus tent that may end up holding a lot more than just a few Klowns.

This film is truly a blast to watch, with a fun plot that truly does embrace the goofy sort of movie it is. While being goofy and for the most part not very scary, there are a few scenes that get very dark and creepy very fast, scenes that likely sparked a new coulrophobia in younger viewers. Another impressive aspect of this film is the creature design of the titular Klowns themselves, done by the Chiodo Brothers themselves, the Klowns are genuinely creepy and unsettling in their design. The actors in this movie, while cheesy at times, are all committed to the wacky movie they are making, most notably Sgt. Curtis Mooney (John Vernon) and the very fun to watch Terenzi brothers. The low budget adds a sort of charm to the film, Killer Klowns is a very enjoyable movie that is perfect for viewing with a group of friends.