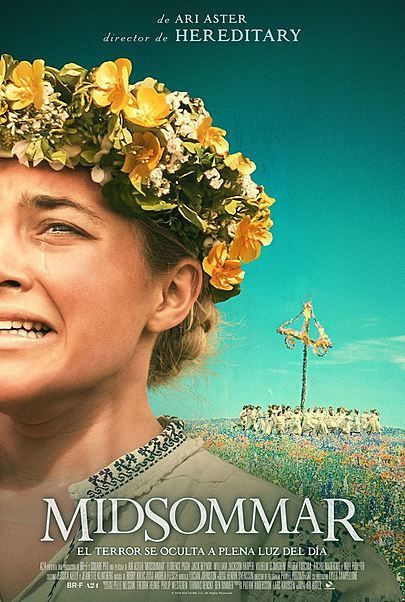 photo or infographic by courtesy of Nordisk Film

WELCOME TO HARGA. What starts out as a sweet adventure in the Swedish countryside turns sinister in Midsommar.

The phrase “Welcome to Harga and happy Midsommar,” reverberated in the minds of a select few American tourists as two elders of Harga dove face first off a steep cliff, marking the end of their life cycle, and the start of a new.

Its a tale as old as time, a grief stricken girl fallen victim to manipulation, and the audience is just here for the ride. We’re introduced to Dani (Florence Pugh) while she’s on the phone trying to contact her family, before we learn that she’s lost them all to a murder-suicide. This gut-wrenching loss is the only thing making her boyfriend, Christian (Jack Raynor), stay with her, and spurs him to invite Dani to spend the summer with him in Sweden.

What starts out as a sweet adventure in the Swedish countryside turns sinister as Dani and her travel group witness the ritual suicide of two elder members of the commune and come to realize the darker nature of the Midsommar celebration. Ripe with incest, manipulative undertones, and murderous intent, the people of Harga have quite the lineup of events planned for Dani and her friends.

The director (Ari Aster) really showcases her creativity with dramatic shots and an immersive score, letting the audience fall down the rabbit hole with our main cast as they delve deeper into the summer festivities. The bright environment and hauntingly sweet background work to make this movie quite the trip for the audience and our characters. If you have almost two and a half hours to spare, then Midsommar is a great way to kill time. You’ll have a hard time finishing a quaint little movie with a plot as great as this.