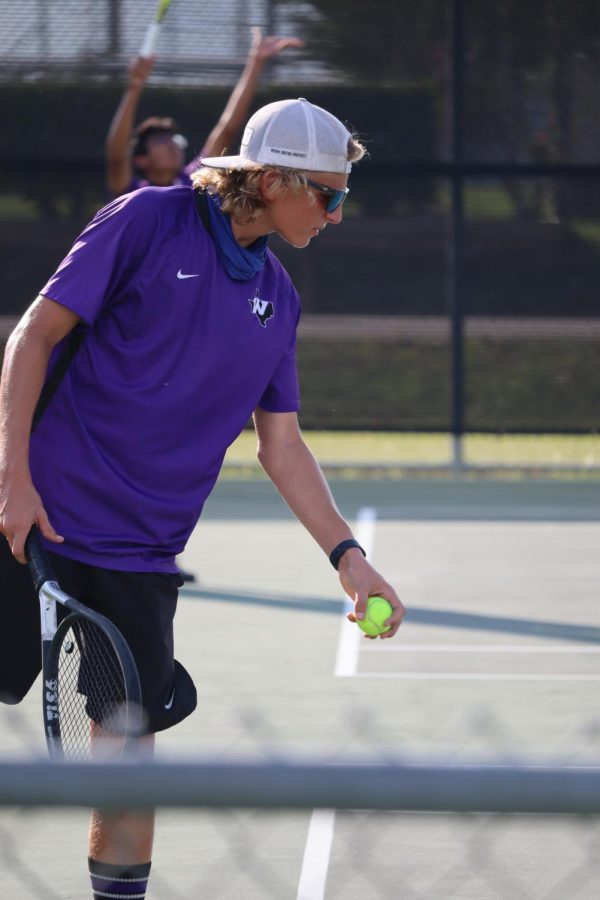 SERVE IT. SMASH IT. WIN IT. In a district match against College Park on Tuesday, sophomore Blaine Eckert prepares to serve. The tennis team plays Huntsville on Friday at home.

Wildkat tennis is back, starting off the season with can do attitudes. They played The Woodlands last Tuesday. They play College Park tonight home and play on Friday at home against Huntsville.

The first game against the Woodlands was a tough loss, but now the players know how to improve their skills.

“I need to improve on my serve, I would like it to have more spin on it rather than being so flat,” junior Ryan Glasgow said.

Leadership is a quality that is needed when playing a more experienced school.

The Wildkats are preparing for tougher teams in 6A this year.

“The important things needed to be successful against better teams are a better mindset, confidence, good teamwork and support from your teammates,” senior Tyler Knopp said.

The goal is always to make enough wins to get to the playoffs.

New people are still learning what high school tennis will be like.

“Improving on multiple skills and getting more experience will help me this season,” freshman Colin Linton said.

The tennis athletes have great character qualities that are going to help them be successful this season.

“As far as how hard the kids work, and how dedicated they are, it is going great,” coach Lisa Parrot said. “They keep up the team spirit and keep everyone working hard.”

It is important to be encouraging to all the players on the team and play all of them during practices.

“We need to be inclusive and have everybody involved no matter their age or skill level,” Knopp said. “The only way people are going to get better is to play different people that they haven’t played.”

The Wildkats are not letting a defeat get in the way of their bright future. They will continue to work hard in practices to get better and eventually win all their matches.

“Although the Woodlands High School beat us, we were able to come together as a team and fight for every match,” Dempsey said. 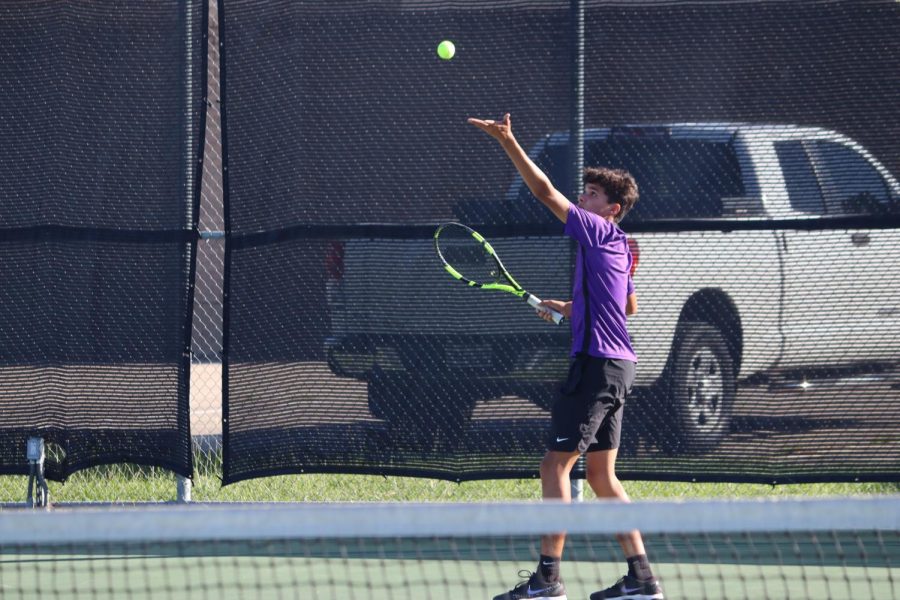 SERVE IT UP. Junior Ryan Glasgow serves the ball. He played a tough match against Grand Oaks.

The rallies have come to an end. The Wildkats put their rackets down as their season closes. Wildkat tennis had their last game last Friday.

Lots of players worked on specific skills to better themselves.

“I learned different foot work and how it benefit me in the future,” junior Nicholas Pate said.

The freshman experience has been great so far.

“My freshman year in tennis has been a lot of fun and hard work,” freshman Colin Linton said. “For next year I am going to be practicing on my own to get better so I can go against better people.”

Seniors have been practicing their leadership skills throughout the season to set an example.

“I have improved as a leader by making sure to push and motivate the team,” senior Megan Leblanc said.

There are high hopes for the spring season.

“The team could have done better, but we put up a fight and will come back stronger next season,” Pate said.

For seniors, this is their last fall season.

“The best part of senior season was going on trips and bonding with the team,” Leblanc said.

Not only are skills needed to succeeded in the sport, it is also the mentality.

“But one thing I took away from this past season was that our team has the potential to compete with our distract, we just need to get in the mentality for it,” junior Ryan Glasgow said. 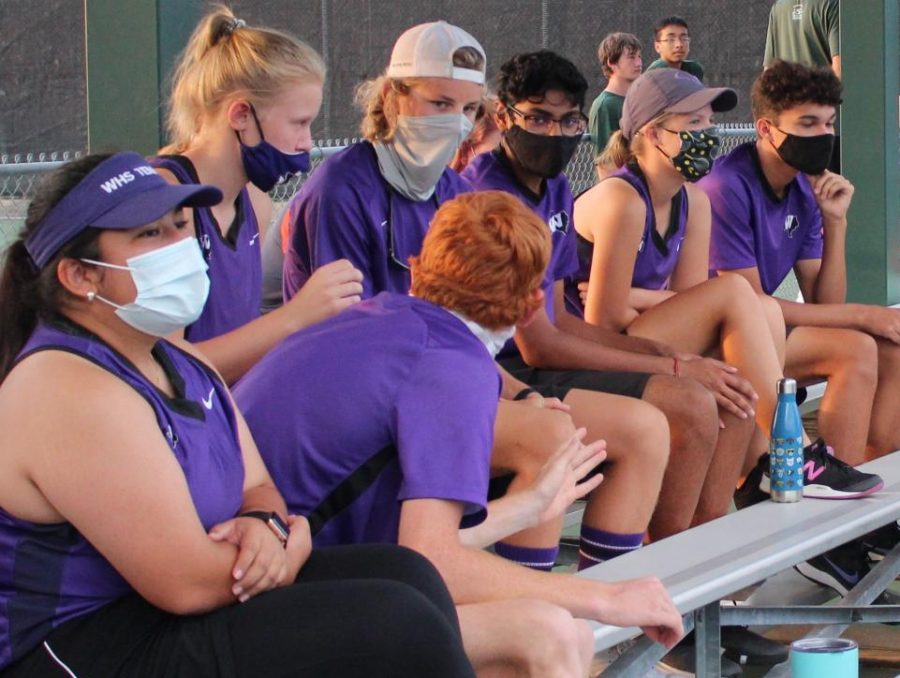 photo or infographic by Georgia Rutledge

LETS GO KATS. During the last game of the night, the tennis team is grouped together watching and the last teammate win.

It’s Friday night, the sun is slowly setting but the game is just beginning. Players walk on the court to face up against their rival school, Huntsville. On one side of the net is the Hornets, eager to fly away with a win, but if the Wildkats have anything to do with it, they will be flying off with their stingers between their legs. 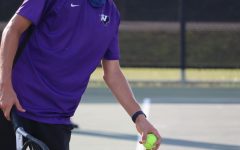 The tennis team won their match 19-0 on Friday, September 18th against the Huntsville Hornets.

“My mentality going into the game was that I was going to try my best in the match,” senior Emily Perez said.  Sometimes something simple like changing how the game is being played can make all the difference in who wins.

“I had to change my game to win in the beginning because me and my partner were over hitting instead of easy placement,” senior Megan LeBlanc said. “Playing Huntsville was different than any other school we played because they did not hit nearly as hard or precisely.”

Playing the game is not always the best part of the night.

“My favorite part was when Carlie was playing the last game of the night, and she won, and screamed ‘Let’s go Kats’,” junior Emmalee Ascheal said. “Hearing everyone scream that after someone wins is the best part of the night.”

It does not take outrageously crazy shots to win games, sometimes all that is needed are the fundamentals of tennis.

“I focused more on essential tennis, rather than trying to outshine the others,” junior Jenna Dempsey said. “Sometimes all you need is to focus on the basics.”

A tennis match is not all about playing, but also about watching other teammates and cheering them on.

“My favorite part about Friday’s match was sitting in the bleachers with my friends and watching the final match,” junior Zoe Picken said.

Playing against school does not just put a win into the schools pocket, but also lets the players realize what exactly they might need to work on to get better.

“My favorite part of Friday’s match was my singles match because it gives me a chance to see how I do on my own and it helps me see what I need to improve on,” junior Colton Land said. “Plus, it is always good to get another win.”

It is imperative that the athlete plays with a positive mindset. If the athlete shows up and expects to lose, they will lose.

“My mentality going into the match against Huntsville was simple; I needed to win,” junior Brenan Mansker said. “After defeating the top player at College Park, I needed to show that was not just a fluke.”